We use cookies on our website. By continuing to browse our site, you are agreeing to our use of cookies.
Find out more about our cookies Close
Home » News & Events » Roman remains found on new housing site

Remains discovered at a Leazes Homes and Newcastle City Council housing development have been described as “perhaps the most significant find in the region for over 50 years” by Richard Carlton, the archaeologist who unearthed them. 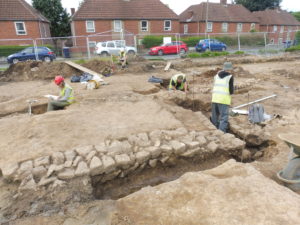 When work on the new development in the Benwell area of the city began it was no surprise when Roman remains were discovered, but what was surprising was the type and scale of what was found.

Although small scale archaeological trenching was carried out before the building work began it was only when a local firm, The Archaeological Practice, carried out a detailed excavation of the site as it was being prepared for build that the real importance of the find became apparent.

The Vicus, or civilian settlement, they found is located to the West and South of Condercum Fort and includes a number of open fronted buildings, cobbled surfaces and water channels indicating that this was the commercial or industrial area of the settlement.

What makes this site particularly special is that unlike other vicus buildings excavated in Newcastle these buildings were made of stone rather than timber.  One of the buildings has substantial buttresses indicating that it was probably a two storey warehouse – the first of its kind to be found in Newcastle.

As well as the buildings the archaeologists found coins and Roman pottery including an almost complete amphora, a vessel that was used to transport liquids such as wine and olive oil.  While the finds are still being analysed they are believed to date back to the second or third century and it is hoped they will improve our understanding of what life was like for people who living under Roman rule. 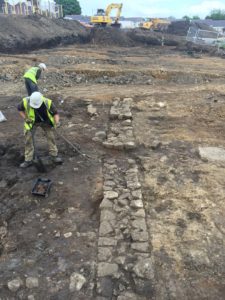 Keepmoat, who are developing the site on behalf of the Council and Leazes Homes have resumed work on the site, which will deliver a mix of 32 new two and three bedroom homes at affordable rent, but plans are in place to stop work again if more remains are found.

Councillor Kim McGuinness, Newcastle City Council’s Cabinet Member for Culture and Communities said “Although we knew there was likely to be Roman remains it wasn’t until they were uncovered that we realised the importance of the site.  We believe these finds could be of national significance. We are working closely with the developers and archaeologist so the remains can be carefully examined and analysed.  We also hope to raise funds so some of the smaller artefacts can be put on display in the local community for everyone to see.”

Chair of Leazes Homes, Bill Midgely said: “We were very excited to hear about the important archaeological finds on our Dorcas Avenue site and pleased to support the important work to recognise their significance. Leazes Homes is committed to providing high quality modern homes but it’s interesting to think of who may have been living in the same area many centuries before our tenants move in.”