We use cookies on our website. By continuing to browse our site, you are agreeing to our use of cookies.
Find out more about our cookies Close
Home » News & Events » Charlotte has community spirit!
Jubilee Court resident Charlotte Morrison proved she’s a valuable neighbour to have after winning a YHN Community Spirit award earlier this year. 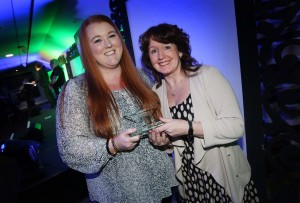 Charlotte received her award at a glittering ceremony at St. James’ Park, presented by Justin Lockwood from Heart Radio after being nominated by Jane McAndrew who works for YHN. A selfless young mother who constantly puts others first, Charlotte has used her previous jobs in finance to help advise other young parents about budgeting and managing their income and expenditure. She also advises those she lives near about setting boundaries with their children and other effective parenting methods. Charlotte says she feels proud of others when she sees them putting her advice to good use. Olivia Grant, Chair of YHN, said: “The YHN Community Spirit Awards were incredibly uplifting and it was a real privilege to be involved in such a tremendous celebration of ordinary people doing extraordinary things. “It’s good neighbours and that certain something called ‘community spirit’ that holds local communities together. These people didn’t want to sit back and let things happen – they made them happen – and it’s so important that we take the time to recognise the selflessness and hard work of these unsung local heroes. “We received some fantastic nominations for this year’s awards and, as ever, we have been impressed by the outstanding work and enthusiasm shown by so many people who really do make Newcastle a better place to live.  I’d like to congratulate all of our nominees and, indeed, our worthy winners for the amazing contribution they make to our fair city.” Short films of the winners’ work were played on the night of the ceremony with many reducing audience members, and the nominees themselves, to tears.